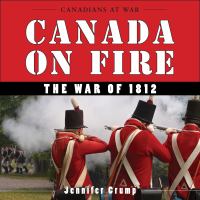 The summer of 1812 saw the beginning of one of the most brutal wars to take place on Canadian soil. With more than 1,600 people killed and a battlefront that extended from Halifax Harbour in Nova Scotia to the Columbia River in what is now British Columbia, the war featured many brave men and women who fended off much larger American forces.

Canada on Fire is an exciting account of the War of 1812 as told through the stories of the heroes who helped to defend Canada, people such as Mohawk chief John Norton, who led a small army into battle against the wishes of his tribe, and Red George Macdonnell, who spent the war defending the St. Lawrence River.

With descriptions of the battle at Lundys Lane, the adventures of the Sea Wolves, and the antics of James Fitzgibbon and his Bloody Boys, Canada on Fire reveals the War of 1812 as it has seldom been seen.

SPL_Childrens thinks this title is suitable for 13 years and over

At the onset of the War of 1812, American President Thomas Jefferson boasted that conquering Canada would be “a mere matter of marching”. He was wrong. Often known as “the war that nobody won”, the War of 1812 continued for three years and at the end, when the Treaty of Ghent was signed, Canada had not only defended itself successfully, but a new Canadian identity and pride had been forged.
There are plenty of “Did you know?s” in this book, such as “Did you know that many of the battles of this war were fought on water – on the Great Lakes and the eastern seaboard?” and “Did you know that at one point in the war, Washington was invaded and the White House and Capitol buildings were set on fire?”
Informative and well-written, Canada on Fire would be interesting reading for both students and adults, as author Jennifer Crump’s style of writing makes the war, its battles and its heroes and personalities “come alive” for readers. The inclusion of an index, a chronology of significant dates, chapter notes, maps, drawings, and lists of primary and secondary sources of information also make this book a well-researched resource to students who are studying this pivotal time in Canadian history.
A relevant question for any book covering the War of 1812 is whether the author gives fair treatment to both sides of the conflict. In this book, the author is careful to give equal coverage to the victories and defeats of both the Canadian/British and the American troops.
A review of this book is timely, as 2012 marks the 200th anniversary of the start of the War of 1812 and Ontario Heritage Week will be observed from February 20 to 26.
Canada on Fire is one of the titles available in the “Canadians at War” series. Readers may also be interested an earlier book, Canada Under Attack,also by Jennifer Crump, who lives in Smooth Rock Falls, Ontario.