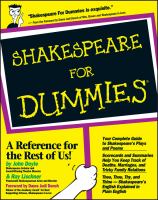 " Shakespeare For Dummies is exquisite."
--from the Foreword by Dame Judi Dench, star of "Mrs. Brown" and "Shakespeare in Love"

Does the thought of sitting through A Midsummer Night's Dream give you nightmares? Did Romeo and Juliet seem like a foreign film--without the subtitles? As John Doyle and Ray Lischner prove in this uniquely accessible guide, Shakespeare is not only the greatest writer who ever lived, he's also a great entertainer--once you get a handle on his wild plots and witty wordplay. Under their guidance, you'll:

Go inside an Elizabethan theater--and find out how they managed with almost no seats, no roof and no women onstage Get a handle on Shakespeare's language--including all those racy puns and jokes Maximize your enjoyment of his plays and poetry Identify contemporary idioms and phrases that come from Shakespeare's plays Find Shakespeare festivals and performances in your area Catch ten of the best show ever made of the Bard's plays and meet ten of the greatest Shakespearean actors of all time

In simple, straightforward language, this friendly guide eases you into the wild, wonderful world of Shakespeare. With the help of snappy summaries and scorecards that help you keep track of who's who, who's in love with whom, and who's killed whom in every play, it helps you:

Understand Shakespeare the person, his life and times and what makes him so special Make sense of Shakespearean language and why it sounds the way it does Get the inside track on the kinds of stories, characters and settings found in Shakespeare's plays Appreciate Shakespeare's sonnets and other non-dramatic poetry

A royal feast for the head and heart, Shakespeare's works have been thrilling audiences for four centuries, as they will four hundred years from now. Now let Shakespeare For Dummies help you to enjoy one the world's great literary treasures.