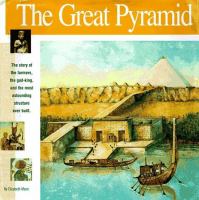 Nearly 50 stories high, The Great Pyramid was built more than 4,500 years ago, made from over 2,300,00 giant stone blocks and constructed by primitive farmers. Some believe aliens from outer space created it, but the true story of the Great Pyramid is even more fascinating than the speculation.

A nation of farmers living on the green edge of a harsh desert had a king who was a god in life and death. Tens of thousands of farmers left their homes each year to chisel hard stone without iron tools and move 10-ton blocks up steep grades without the use of a wheel.

Laura Lo Turco 's shimmering paintings are a perfect visual complement to the text, combining reality with a sense of awe and mystery. Photographs of haunting 4,500-year old walls and statues let Ancient Egypt remind the young reader that these people were indeed real.

Wonders of the World series

The winner of numerous awards, this series is renowned for Elizabeth Mann's ability to convey adventure and excitement while revealing technical information in engaging and easily understood language. The illustrations are lavishly realistic and accurate in detail but do not ignore the human element. Outstanding in the genre, these books are sure to bring even the most indifferent young reader into the worlds of history, geography, and architecture.

"One of the ten best non-fiction series for young readers."
- Booklist