Saved Searches Advanced Search
Due to system maintenance, the access to online library catalogue and account, telephone/text renewal lines, databases and digital resources will be temporarily unavailable from 7 am to 10 am, April 20. Thank you for your patience.
Please be advised all library branches will be closed effective Saturday, April 3rd due to the latest provincial requirements. Our curbside pickup service remains available within service hours.
Print 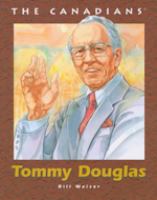 Named CBC's Greatest Canadian of all!

Tommy recalled in the 1950s, "I came to believe that health services ought not to have a price-tag on them, and that people should be able to get whatever health services they required irrespective of their individual capacity to pay." He was talking about what would become known as Medicare.

Douglas was hospitalized at the age of 10 due to a bone infection he encountered four years earlier. After several operations - none of which were successful - and without the money to pay for a specialist, the doctors recommended that his leg be amputated. That's when fate intervened. A famous Winnipeg orthopedic doctor met Tommy in the hospital ward one day and proposed to operate on Douglas for free, taking on the case as a teaching project for his students.

The surgery saved his leg, quite possibly his life, and would be the beginning of his inspiration for universal medical care.

Tommy Douglas was a Baptist preacher who organized his church as a relief centre for the poor in the hungry 1930s and rose to become a political legend in Saskatchewan, winning five straight majority governments and transforming the province. This acclaimed biography, written by a longtime friend and associate, closely follows his life through his working-class childhood and his boxing and political careers on the prairies to his years of national prominence as an advocate for peace, human rights, and Canadian independence.

Douglas chose a hard road: in provincial government and federal opposition, he faced continuing hostility from mainstream institutions and the media. Often, though, his seemingly radical proposals simply anticipated later events. The Saskatchewan government's medicare program provoked a bitter doctor's strike and continent-wide controversy in 1961, but the program proved to be a success, and medicare was soon introduced across Canada with the support of all political parties.

Tommy Douglas is still remembered as one of the country's most eloquent orators and as a critic of the status quo. He was passionate in opposition to corporate power and in defence of Canadian nationalism; his refusal to support the War Measures Act during the terrorist scare of 1970 earned widespread condemnation, but is also considered by some to have been his finest hour.

In his long and extensive political career Tommy went on to: