Saved Searches Advanced Search
Due to system upgrade, telephone renewal line will be temporarily unavailable from 10 pm, October 20. Thank you for your patience.
Some of our branches have reopened. Click here for details. Returned items will be isolated in our branch for a few days and then processed, so items may remain on your account after you return them. Thank you for your patience.
Print 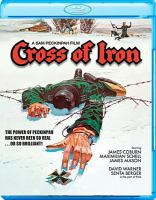 A squad of German soldiers fighting on the Eastern Front during WWII led by a battle-hardened sergeant fight to survive Soviet attacks and dogmatic commanders in a chaotic and lethal environment.
Audience: OFA rating: Restricted
Must be 18 YEARS OF OLDER to borrow this item.

Language Note: In English dubbed in French.
Closed captioned for the hearing impaired.

Some content below may have been reported by users for containing spoilers or offensive content. Learn More

Lots of killing scenes. But I guess that's the way it is in War.

Perhaps the late 1970s are the seedbed for having the dialogue in loud, aggressive action movies muttered or murmured in voices that very seldom rise above a whisper. At any rate, Cross of Iron suffers from this inexplicable technique. Just why would anyone surrounded by noise go all sotto voce? Maybe the intent was to demonstrate that words are inadequate to extreme violence, and certainly, the fact that the bulk of what we see is so quickly edited and so jagged in terms of points of view that it constitutes a kind of art-film essay on modern combat. But that editing and that positively cubist juxtapositioning of viewpoints are the film's primary distinctions, dwarfing the story of grunt-vs.-officers, lower-vs.-upper class, survival-vs.-game-playing that Coburn the sergeant and Schell the Prussian officer-corps elitist play out. Note that Schell's character makes a point of never having been a Nazi--so is it his Prussin heritage that's really the fault in him or, indeed, in German murderousness? I don't recall hearing the word "Jew" in the entire film (could be it was whispered during a blitz), and the only time "Nazi" is spoken, it is ironic. Note that the party informer who replaces a casualty in Steiner's (Coburn) platoon is given a hard lecture on his first loyalty being to the platoon, and that he is the one who precipitates his own and two other men's deaths during the encounter with Russian women soldiers. Nobody goes around sieg-heil-ing at all. That's good for the humanitarian antiwar thrust of the plot, but is it credible, especially when formally saluting? --Ray Olson

Peckinpah's WW2 masterpiece.
1943. Stalingrad has fallen and The German Army is being pushed back on the Eastern Front. Nowhere is the situation more dire for the Germans than at the Kuban Bridgehead / Taman Peninsula. Here we see the war through the eyes of a platoon of German reconnaissance troops. Their senior NCO is a grizzled, resourceful veteran, Corporal Steiner (played by James Coburn). He is unconventional, insubordinate and irreverent, but the regiment's commander, Colonel Brandt (James Mason), tolerates this as he gets results. However, his company has a new commanding officer, the inexperienced Captain Stransky (Maximilian Schell). Stransky is a by-the-book, authoritarian aristocrat and him and Steiner are bound to clash. Moreover, Stransky is obsessed with winning the Iron Cross.
Directed by Sam Peckinpah (Straw Dogs, The Wild Bunch, Pat Garrett and Billy the Kid), this is Peckinpah's Magnum Opus. Very gritty and realistic portrayal of war. Shows perfectly the chaos, terror and desperation of battle - the perfect maelstrom of war.

Its complex and vivid portrayal of the absurdity of war, however, prompted none other than Orson Welles to write Peckinpah and proclaim it the finest antiwar film he had ever seen.

Sam Peckinpah, famous for his blood & guts treatment of everything from westerns to social commentary ("The Wild Bunch"; "Straw Dogs") casts a critical eye on the madness of war in this his only WWII drama. In true Peckinpah fashion violence and mayhem are omnipresent with exploding mortars forming a background score of their own and scenes of battlefield carnage rendered almost commonplace through sheer repetition as if the director, not content to simply decry the inanity of warfare, felt the need to rub the audience’s nose in it. Trudging through a forgotten circle of Dante’s Hell, the two leads face off against a landscape of blasted craters and muddied corpses, the one damning his soul with every bullet he fires the other vainly chasing a trinket he believes will restore his lost honour. Savage and almost farcical in its refusal to bestow a deeper meaning to the onscreen chaos, Peckinpah is not interested in fashioning heroes. Instead he shows us a world where men kill for political whims, youth is corrupted, and even the fairer sex is demoted to a tribe of vengeful valkyries. “What will we do when we have lost the war?” asks one weary officer of another, “Prepare for the next one” comes the curt reply. Also starring James Mason as a colonel desperately clinging to some sense of integrity and David Warner as his cynical captain.

Outstanding WWII film directed by Sam Peckinpah, and told from the perspective of the Germans. The film is bloody, hallucinatory and emotionally involving.

If you are a Peckinpah fan and liked, The Wild Bunch, The Getaway(1972) and Junior Bonner you'll enjoy this story. It's told from a German soliders point of view. One of the most realistic movies about WWII I've seen. The weapons and uniforms were dead on, no pun intended. Wow! For anythime this would be an great movie but it being made in 1977 with no CGI! It is awesome! Been hearing about this movie from a friend and had to see it. Peckinpah at his finest. If you are a WWII movie fan you'll enjoy the time and effort they took to make this flawless.

Sam Peckinpah’s films are generally described as brutal, unforgiving, and vicious. But more often than not, if you look closely, you’ll notice a heartfelt and bittersweet approach to filmmaking. His anti-heroes are generally men who are opposed to the violent acts they commit, but continue to do them nonetheless. In Cross of Iron , James Coburn is the film’s protagonist, a worn out German officer in the Second World War. He struggles against his own monstrosity, being surrounded by death at all times, and power-thirsty superior officers. Yet all the while, the film takes a sympathetic glance at the character, showing him not as a conventional hero, nor as a villainous monster of war, but as a sad and lonely man.

Coburn’s character also happens to be a Nazi. Naturally, so Peckinpah could continue in his quasi-likable depiction of the man, he had to construct the character (and most of his fellow soldiers) as disagreeing with the Nazi philosophy. But nonetheless, he’s a man fighting on the side of the war Hollywood constantly depicts as entirely malevolent and barbaric. Peckinpah is more open-minded towards labelling characters. Cross of Iron is a tribute to the people who are misjudged by history (“history is written by the victors”, etc.). As horrific as the Nazi’s actions were, there were many who fought in the military without supporting the party’s ideology and did not engage in savage war crimes. Peckinpah understands this, and while he also demonstrates genuine textbook examples of Nazis for the sake of contrast, his main characters are not considered “the bad guys”. They’re treated like how countless American anti-war films show American soldiers. That’s the innovation and bravery Peckinpah is able to pull off.

As always, Coburn delivers a physical and draining performance. He’s grizzled and battle fatigued, and filled with aggression. He satisfies Peckinpah’s standards for hyper-masculine characters, but also incorporates an emotional side to the character that can also be found in all of Peckinpah’s best films. There are moments on the battlefield where Coburn releases strange but realistic grunts and moans without any shame or reluctance. It’s a complete embodiment of the role, and one he executes without any struggles.

Maximilian Schell delivers a more by the numbers performance, and certainly a less demanding one. He plays the uptight and glory-obsessed aristocratic captain obsessed with being rewarded the Iron Cross medal. The film sets out to trivialize not only the medal he dreams of, but also the military infatuation with honor. Schell is believably reprehensible as the strict captain who clashes with Coburn, but it’s hardly a difficult role to succeed in.

Peckinpah is often credited with, for better or worse, bringing the slow-motion effect to action cinema. In The Wild Bunch is was both revolutionary and effective. But in Cross of Iron it feels clumsy. Like the numerous unremarkable action filmmakers, Peckinpah fails to appropriately use slow-motion, which is bizarre, considering it’s his own technique.

The battlefield sequences are unengaging, when they should be the opposite. The editing is choppy, consisting of terrible cuts. Certain scenes feel nearly incoherent as the editor never lets the camera stay on one part of the battle, instead jumping to something else every five seconds. It certainly creates the destruction and chaos of warfare, but doesn’t display it in a way that we can follow.

A deteriorating boozehound at the time of its release, Peckinpah continued his thematic spiritual saga about the effects violence has on the traditional action hero. His films played an essential part in ending the myths decades of John Wayne films enforced. Cross of Iron is one of his shakier efforts, but an important one regardless.