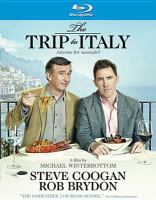 The Trip to Italy

stopped watching after a few minutes -not what expected

Got this mainly for the scenery, but all we got were two men yak yakking about boring stuff. Not amusing, or funny. Heard the impersonations too often, camera focused on them in the car and not on the countryside - at least as far as we got. And to add to the misery, we were forced to sit through almost 20 minutes of previews. Couldn’t fast forward on this.

Meh. Beautiful scenery, but only funny if you think repetition of an Al Pacino impersonation ad nauseam is humor.

The photography is gorgeous. (But then, it's Italy : )
However, this wasn't supposed to be Funny or Entertaining, was it???? Gag... : P
Lots of pontificating about untruths, mental ma$terbation, and lascivious behavior.
Are we seriously supposed to take any of this as normal or acceptable!?!

The first movie, The Trip, was a tad better. Or, maybe it's that one tires of listening to the constant shtick-dueling of these two. The perpetual philandering - this time around it's the other one who cheats on his significant other - is both distasteful and unnecessary. It certainly didn't add anything to the story (except to put me even further off these self-centered "boys"). But, then again, these two appear to be completely self-absorbed narcissists so maybe that was the point. The views of Italy are lovely, but there were such few, and short, views of the food!! Won't watch another, if there is one.

I enjoyed the wit of the 2 protagonists and, to be honest, some of the deleted scenes were funnier than the theatrical version. A number of audience members do not really care about the sub-plots (family etc.) and would just prefer to see these two people riffing on each other.
I hope they make a third.

After seeing preceding "The Trip", and enjoying immensely, skeptical about this offering. I was not disappointed. The level of wit and change of venue used to great advantage.

After seeing preceding "The Trip", and enjoying immensely, skeptical about this offering. I was not disappointed. The level of wit and change of venue used to great advantage.

Here we go again. You would think that since they are a little older and hopefully wiser.... But that's not the case. Several funny scenes like the "small man in a box" at Pompeii cracked me up.

Not sure why this is labeled as a comedy. NOT funny.

And nothing ruins the beauty of Italy like 2 ugly British guys with bad teeth who are not able to shut up and seem to love to hear themselves talk.

These 2 idiots can't shut up even when they're eating.

BORING, STUPID and a waste of time. Glad I did not pay to see this otherwise I would have asked for a refund.

-It just feels odd doing something for a second time.
-You know, it’s like second album syndrome, isn't it? Everyone has this amazing, expressive first album, where they put everything into it, and the second album's a bit of a damp squib.
-It’s like trying to do a sequel, isn't it? It's never gonna be as good as the first time.
-Godfather ll.
-Which is the one that people always mention when they try to search for an example of a sequel that's as good as ...

- You know, I can see the appeal in a woman like this. Volatile women are always sexy when you first meet them, but two years down the line, you're sort of saying things like: "Can you just put the lids back on these jars, please?" "I admire you taking a stand against society's mores by wearing your jumper inside out. ..."
===
-When Vesuvius erupted, it just went "bang!" And a cacophonous bang. They would've seen a plume of smoke, just-just "boom" right from back there.
And a cloud going up into the sky. 30,000 Hiroshima bombs, 200 megatons- imagine that loud a sound. This whole city's preserved in formaldehyde, like this artificial- that's why ifs so remarkable. It’s like a photograph
of the past.
-It’s a sculpture of the past. Well, you know, a sculpture is an impression. A photograph-that's reality.
-Yeah, but a sculpture is 3-D. A photograph is 2-D.

-Don't you think everything's melancholic once you get to a certain age?
-I do.
-Garrison Keillor said, “When you're under 40, seeming unhappy makes you look interesting, but once you're 40 and beyond, you got to do everything you can to smile. Otherwise, you just look like a grumpy old man."
===
"My soul is an enchanted boat, which, like a sleeping swan, doth float upon the silver waves of thy sweet singing." That's Shelley, read by Burton.
===
There was a ... there was a time when I used to make eye contact with a woman, and she'd flash a smile back, and that's all it would be, just a little moment. Those-those women just, uh- they just- the smile you get from them is the smile they give to a benevolent uncle. Or a pest.
===
-Jude Law's 40-plus.
-He doesn't look it, does he? He hasn't aged like you and I.
-Well, he's balding.
-Yeah, but he's got that face, he does.
-He's got that really young bald look.

-What's the food been like so far in Italy, compared to the food
in the Lakes?
- A lot of pasta.
- A lot of pasta. Yeah. You can't do the Atkins diet
on this trip. That's for sure.
===
Quoting Shakespeare’s The Tempest: Nothing of him that doth fade, But doth suffer a sea-change Into something rich and strange.
===
Quoting Nietzsche: Sorrow is knowledge. 'They who know the most "must mourn the deepest o'er the fatal truth. The tree of knowledge is not that of life."

-That pasta, in that bowl, A ravioli, What the Italians do very well are simple foods with simple ingredients, but they have the best ingredients. They send us all the shit stuff. They hang on to the best tomatoes …
===
It’s not like-it’s not like it’s a new town. They've had 2,000 years to sort out the traffic system.
===
"He possessed two of the most important ingredients of greatness: total self-confidence and super-abundant energy. He feared nobody. He was equally at home in a palace or a tavern..."
-Tick, tick, tick.
-"A church or a brothel."
-Tick.
-"He was totally devoid of a sense of morality. Love for him"..."Had no connection with evil. It meant pleasure, pure and simple."
-That's not me. I've got a moral compass.
-Oh, yes, you have a moral compass. It’s just you don't know where it is.

The locales from http://www.ft.com/cms/s/2/71126a3a-be39-11e3-961f-00144feabdc0.html :
There’s time for a brief stop at Byron’s house in Genoa before heading south to the Italian Riviera and the charming seaside village of Camogli, where terracotta-coloured houses cling to steep hillsides overlooking the aptly named Golfo Paradiso. Nearby, the fishing hamlet of San Fruttuoso is a picture-perfect setting for a plate of fritto misto on the beach at La Cantina (www.lacantinasanfruttuoso.it).

Continuing their grand tour, Coogan and Brydon drive through the rolling hills of Tuscany, before stopping off in Pisa and then Rome, where they visit the Protestant Cemetery where Shelley’s ashes are buried, the Colosseum and the Spanish Steps, and enjoy a meal at German chef Oliver Glowig’s two Michelin-starred restaurant (oliverglowig.com) near Villa Borghese.

Next stop is the Amalfi coast, where the highlights include a visit to Pompeii and a long, boozy lunch on the terrace of the elegant Villa Cimbrone hotel in Ravello. The trip ends in Capri with yet another memorable meal, this time at Il Riccio, the breezy seafront restaurant of the Capri Palace Hotel.