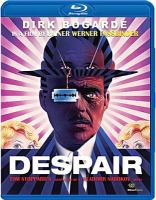 Against the backdrop of the Nazis' rise to power, Hermann Hermann, a Russian ©♭migr©♭ and chocolate magnate, goes slowly mad.
Audience: Must be 18 YEARS or OLDER to borrow this item.
OFRB rating: R.

Language Note: Closed captioned for the hearing impaired.
In English dubbed in German and French.

"Despair" is a sublime meditation about existence, and, its complex meaning. This might as well be one of the most atypical movies ever directed by R.W. Fassbinder, it has more of an International co-production flavor, and, handsome look, definitely more period sets, costumes, and, make up, and, it looks like it was shot in a much longer, and, more "mainstream" shooting schedules, than other Fassbinder's movies (some of the better ones were notoriously shot over a 3 weeks spawn, but this seems a film produced with a more regular scheme, and, obviously a larger budget, and, international cast and crew! And, it is especially thanks to the casting of the quite unforgettable and of course English speaking, Dirk Bogarde, as the conflicted and enigmatic lead, the actor embodies with painful sarcasm, giving to his difficult, multi layered role a class completely out of the ordinary and a presence that is as penetrating as it is quite haunting, with an ensemble of exceptional actors such as the French Andrea Ferreol, in a very unusual movie appearance. The incredible script by Tom Stoppard is wildly ironic, and, so is the tone of this compelling if complex movie capable to deal with extremely profound sentiments, madness, despair, and, finally, 1930's Nazi's rise to power, still always maintaining a wonderful stalking impact and visual ground breaking choices. The whole film suffers at times of the more usual, much stronger style of its genius director, while, at the same time, it does indeed present a whole new key to a quite diverse interpretation of Fassbinder's personal vision, and work, who seemingly was striving here to shoot in a contest of almost much more international cinema, thinking also to wider and diversified audiences. While the result is not always completely accomplished, it is still a stunning movie, rich of a saturated cinematography that perfectly evokes the times and the places, while, if Fassbinder's usual genius may here seem a little compromised, it is nonetheless worthy the name of one of the most poetic, innovative, and wildly innovative directors of all times.

For starters - I'd say that watching "Despair" was (amongst other things) a very, very, very despairing experience. Very.

This 1978 German production was directed by Rainer Fassbinder. And - Let me tell ya - Had "Despair" been a Hollywood production, directed by an American film-maker - Then - You can bet that no one would be heaping praise on it like they are just because this one happens to be a foreign import. It's true.

Set in Nazi Germany during the 1930s - I found "Despair" (for the most part) to be a really plodding and senseless mess. In other words - It was a typical "Fassbinder" film.

Adapted for the screen from the novel written by Russian author, Vladimir Nabokov - This one's story may have worked well in book format - But, put into the incompetent hands of director, Fassbinder - It totally stank like the reeking stench of rotting sauerkraut. Yep. It really did.

No subtitles which renders it incomprehensible, slow moving, lost.

I just got the Olive Films blu-ray release of Despair. True to form, Olive Films omits English subtitles and closed captions. In this film, subtitles are absolutely necessary if you want to catch all of Bogarde's lines, which he delivers in a hard-to-understand, feigned foreign accent. This makes it especially difficult for viewers who are not native English speakers, or whose hearing is less than perfect, to follow all the dialogue. It would cost Olive Films a negligible amount to add subtitles to their blu-ray releases, but for some reason they are determined to ignore the wishes of a large segment of their home video audience and the wishes of many library users. Apart from the Olive Films movies, thank you Multnomah County personnel for all the great classic and foreign blu-rays you are ordering!

Memorable visual effects and Hermann Herman's distorted realizations of reality; would like to see it again.