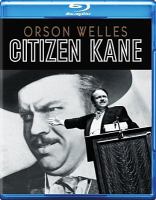 It's been called the greatest American film. A bold claim, but it's every bit as good as it's reputation.

this movie aged very well because of the storylines and the cast inclued orson welles
and the politics in this movie has aged very well this movie have reached it's landmark the movie features all time greatest movie catch phrase ''rosebud''.truly worth seeing and checking out.a must own dvd.

📰 Many viewers with little knowledge of film history won't realize how groundbreaking "Kane" was. That's because its new techniques have been widely adopted, although not quite as well as Orson did it. For instance, there are flashbacks within flashbacks in Kane, and no many how many times you see it, you can't tell what shot is coming next. Yet when you get to the end, the audience knows it's seen a complete logical story. Compare that with the structure of Pulp Fiction, also full of flashbacks, where you can't tell what's going on, and most of the audience couldn't make a stab at explaining what the story was. Welles pioneered the use of deep-focus photography, now greatly ignored in TV, where indoor shots routinely have the background a blur. (Saves on set decoration that way.) You'll notice that in Kane, you can see the ceilings of rooms, which was never done before, because cameras, lighting, and mikes used that space. And, the performances, especially Welles', are outstanding. There's hardly a shot without a special effect in it, but you hardly notice most of them.

With "Citizen Kane" now being close to 80 years old, I really did try to cut it some serious slack. But, I cannot, for the life of me, understand why so many people praise this one to the high heavens. For all of their gushing over this movie - I believe that they've been viewing it through the haze of rose-colored glasses. It's the only thing that makes sense to me.

Yeah. OK. There were a number of interesting camera angles shot during some of the scenes and, yeah, there were a few intriguing moments that took place throughout the story-line. But, hey! - Let's face it, folks - All-in-all - This is definitely one of those movies that is far too over-rated for its own good.

I mean - C'mon, everyone! - Wake up to the reality of cinema in the 21st century here!

I have no doubt that back in 1941 - "Citizen Kane" was a ground-breaking movie that was loved and praised by millions. But, the problem is, I watched it for the first time 78 years after it was released and, believe me, these many years have not been kind to this film.

Sure. The first half of this film definitely shows some real promise. Its story starts out with the death of Charles Foster Kane and then reverts back to the time when he was a boy and how he inherited his wealth. Then we see Kane as an enthusiastic, hard-driven businessman who's sole aim is to become the biggest newspaper mogul around.

Up till that point the film is fine, but, the last hour is actually a bit of a mess. It goes from being a politically-motivated movie to a film about one man's pursuit of self-destruction. And, I have to tell you - I was certainly hoping for so much more from "Citizen Kane", but, it just didn't deliver.

A classic style movie of a man that builds an finance empire and how ones ego can cause them pain. That said despite the great acting and shots, I found the overall story not as interesting as I like and somewhat predictable (even the ending which I was slightly spoiled on). If love classic movies, are ok with a slow pace at times, and don't mind a story that you can guess the flow of, this is a really good movie though I wont say its the best.

This movie is believed to be the best movie ever made. Dating all the way back to 1941, this mystery drama follows a reporter who was assigned to uncover the truth and meaning behind the dying words of Mr. Kane - “Rosebud”. Through this film, it is revealed that he came from rags to riches, and lived a very elusive and mysterious life that brought him to where he was the day that he died. The performances are outstanding, the directing is incredible, and the cinematography is mindblowing. I would rate this classic film 5/5 stars and recommend it to anyone who enjoys simply extraordinary films. @The_Reviewer of the Teen Review Board of the Hamilton Public Library

A scandalous box office flop upon its initial release, co-writer/director Orson Welles’ signature opus is now considered one of the benchmarks in modern American cinema launching the careers of such stars as Agnes Moorehead and Joseph Cotten. If the story is simple enough—mega-billionaire Charles Foster Kane (Welles libelling William Randolph Hearst) spends his entire life amassing material possessions only to make a deathbed discovery that the one thing he truly desired was never for sale—its execution is pure cinema magic. Deep focus techniques render backgrounds and foregrounds with crystal clarity, cameras seem to melt through ceilings and table tops, and B&W matte paintings give Xanadu, Kane’s gaudy Florida estate, the aura of a haunted house. Told in post mortem flashbacks as a roving reporter interviews everyone from Kane's best friend to his business associates, butlers, and a drunken ex-wife (Dorothy Comingore libelling Hearst’s mistress Marion Davies), all of whom offer a different glimpse into the man behind the legend. Big, brash, and unapologetic—much like its creator—and impressively filmed even if the cinematography does occasionally resort to flashy gimmicks and that much anticipated final reveal proves something of a let-down. An interesting pop-psychology foray into what makes a megalomaniac tick (Kane’s brush with politics seems frighteningly contemporary) and the fact that Welles was only twenty-five years old at the time is almost unbelievable.

It was screenwriter Herman Mankiewicz's loathing and hatred of both William Randolph Hearst & Marion Davies (fuelled by Orson Welles) that brought Citizen Kane to the silver screen.

Though it was a very thinly disguised story about Hearst and Davies, this film's underlying viciousness hit so far below the belt that, not only did it portray Hearst as being a pathetic, lonely, ego-centric hoarder and Davies as a nagging, gold-digging, no-talent singer/actress, but it also revealed to the whole world the word "Rosebud".

"Rosebud", which was the final word uttered by Charles Foster Kane, on his death-bed, wasn't (in reality) the name of a wooden sleigh that he had cherished so much as a child. No. "Rosebud" was actually, in reality, Hearst's pet-name for his mistress's (Marion Davies) clitoris. (It's true. Look it up.)

And, of course, the biggest problem with Citizen Kane was that its whole story was literally based on this one, single word "Rosebud".

With most people (back in 1941, and even now) not knowing the real meaning behind this word (it was a Hollywood in-joke), the viewer is forced to have to endure hearing it being spoken umpteen times throughout the course of this 2-hour picture.

Since I am hip (and, so now, you are, too) that "Rosebud" really meant Davies' clitoris, I can't begin to tell you how tired I got of hearing that word being spoken by actors who were obviously doing a very good job of concealing their smirks whenever they were required to repeat it.

Knowing the truth about the meaning behind "Rosebud", I think that it truly renders Citizen Kane as being one of the nastiest, most vile "revenge-movies" ever made against 2 very real people (who were both still living at the time) that I've ever seen.

I can't think of another movie out there that goes so out of its way to make such a sneering mockery of two people (in this case Hearst & Davies). Its 2 screenwriters (Mankiewicz & Welles) and its director (Welles again) clearly showed how much deep-rooted contempt they had for these 2 people, whom they only slightly knew.

"I think it would be fun to run a newspaper."

Female reporter: "If you could've found out what 'Rosebud' meant, I bet that would've explained everything." Thompson: "No, I don't think so... no. Mr. Kane was a man who got everything he wanted and then lost it. Maybe 'Rosebud' was something he couldn't get, or something he lost. Anyway, it wouldn't have explained anything... I don't think any word can explain a man's life. No, I guess 'Rosebud' is just a... piece in a jigsaw puzzle... a missing piece..."