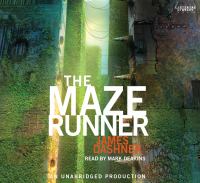 Book one in the blockbuster Maze Runner series that spawned a movie franchise and ushered in a worldwide phenomenon! And don't miss The Fever Code, the highly-anticipated series conclusion that finally reveals the story of how the maze was built!

When Thomas wakes up in the lift, the only thing he can remember is his name. He's surrounded by strangers--boys whose memories are also gone.
Outside the towering stone walls that surround them is a limitless, ever-changing maze. It's the only way out--and no one's ever made it through alive.
Then a girl arrives. The first girl ever. And the message she delivers is terrifying: Remember. Survive. Run.

"[A] mysterious survival saga that passionate fans describe as a fusion of Lord of the Flies , The Hunger Games , and Lost . " --EW.com

"James Dashner's illuminating prequel [ The Kill Order ] will thrill fans of this Maze Runner [series] and prove just as exciting for readers new to the series." -- Shelf Awareness , Starred

So good! I love books that take me to new places that would never existed. This book is full of action. Love it

This book is the first book in the Maze Runner series. It had me wondering what would happen next. I can't wait to start reading the next book! I loved it and recommend it to those who love SciFi and Fantasy books.

The Maze Runner is a sci-fi young adult novel. It is about a teenage boy named Thomas who has been placed in a field with other teenage boys; all of them do not have any memories of the outside of world, themselves or how they got there. They must try to escape the maze which is filled with monsters to survive. This is book is a page turner and the readers will be able to relate to the characters presented in the book. You will smile, laugh and cry with these characters. This is one of my favourite books and I would recommend it to others to give it a chance. 4.5/5 stars
- @Gray19 of the Teen Review Board of the Hamilton Public Library

The Maze Runner is the first book of the Maze Runner series. The story follows Thomas, a boy who has lost his memory and is trapped within a maze with a group of boys who have been living there for up to two years. Thomas must help the boys (known as the Gladers) uncover the mystery of the maze and plan their escape. The story is enjoyable and does a great job of barely giving the reader enough information as they need to know, creating mystery. The pacing is enough to keep you reading for long periods of time as every chapter is either trickling down more information or some other exciting development occurs. The story of an amnesiac waking up not knowing anything about the situation they have been thrust into is fairly overdone, but The Maze Runner manages to pull it off in a way that seems original and interesting. A great start to a potentially great series. 4/5 stars
- @Fulton of the Teen Review Board at the Hamilton Public Library

The movie actually freaked my brother and I out a lot more than the book did. The whole deal with those monsters/grievers was very gross and unappealing to imagine. I would definitely recommend the books more than the movies for younger readers. When I read this, I was a lot younger and didn't pay attention completely to the books I read. This leads me now to have forgotten so much about series I have previously read, including this one. But my favourite characters would probably be Minho, Teresa, and Chuck. Well, maybe not throughout the whole series but at least in this book. The survival is intense though! 5/5 stars.
- @Siri of the Teen Review Board at the Hamilton Public Library

Let’s start with the most important: this is book 1 in a series. This book has no ending. Do not start unless you’re prepared to keep on in the series. The copy I pulled off the library shelf gives no warning of this. Nothing on the CD box cover or back says anything about it being book 1 or part of a series. I was very upset when I got to the end with nothing resolved. Until then I was wondering whether to give it four stars or five in my review. Now I can barely squeeze out three. There’s nothing wrong with a series, but in my opinion, every book in a series should be a complete story in itself. No reader should be left hanging at the end of a book.

That said, the book is well-written and suspenseful. The main character, Thomas, is a teenage boy who finds himself thrust into a strange place called The Glade populated with other teenage boys. He, like the others, has no memory of his prior life. The Gladers have a strange jargon and seemingly only one mission: to solve the Maze. Every day runners go out into an enormous maze whose walls change daily, looking for a way out. Others stay in the Glade growing crops, cleaning, cooking, and so forth. Weekly supplies arrive via a mysterious elevator. A new boy arrives once a month the same way. The maze fills with fearsome and deadly creatures called grievers at night, and sometimes during the day. Soon after Thomas arrives things begin to change. He survives a night in the maze. A teenage girl, the only girl ever, arrives via the elevator only a day or two after Thomas. I’ll leave the rest to your imagination, although the story arc is pretty predictable (other than the fact it doesn’t resolve).

Our library has a Young Adult (YA) section, and even a separate sci-fi subsection within it. I never take anything marked YA. Yet I think this book must have been written for that demographic. All the characters are teens. There is sexual tension between Thomas and the girl, but no actual sex. All the cursing has been bowdlerized into Glade jargon. Now that I know it’s a series, I have no doubt it was conceived as a formulaic copy of The Hunger Games trilogy, only for boys. Teenagers fighting for survival against mysterious forces of evil. So it’s mislabeled both in failing to alert you that it’s a series and also that it’s aimed at the teen reader. Hmmph.

The jargon is well-conceived and works well. Shucking, shanks, “good that.” It seems natural without sounding obscene or crude. However, the level of death, gore, violence, and torture seems extreme for the teen market. Even for an adult audience it seems gratuitously excessive to me. I’m not interested in reading more of it and won’t be finishing the series, nor, as I gather from some editions, watch the movie which I see is available as a Blu-ray disc.

I listened to the CD version. The reader is excellent. He has a nice voice, can act, and does several accents credibly. The story is quite engaging and will keep you reading or listening, but just be prepared for the story to suddenly stop (or be prepared to find the next in the series.)

Very good book. I love the spotlight it gives to technology... better than maybe "Divergent" and "The Hunger Games". I also love how passionate Mark Deakins reads. I only wish James Dashner wrote this from the first person, it'd be more personal to Thomas.

Completely derivative. Think Hogwart's moving stairs mixed with Mockingjay's teen battles. Characters engaged in lots of running around but the plot moves slowly through many pages.

this book is amazing has action, a bit of romance, drama, adventure!!! Definitely one of my fav's
_hannah

the most scaryest movie i ever watched

i uh kinda cried at a part idk if its in this book or the next but ya... i cried

blue_bat_1530 thinks this title is suitable for 99 years and over

burgundy_squirrel_10 thinks this title is suitable for 11 years and over