Saved Searches Advanced Search
Due to the latest lockdown measures issued by the provincial government, our three resource libraries will be closed from December 26, 2020 until the lockdown is lifted. Curbside pickup will be available at our resource libraries daily during regular opening hours. Our community branches remain closed and offer curbside pickup during the specified curbside service hours. Click here for details. 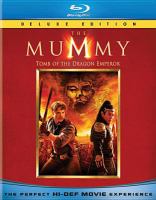 Tomb of the Dragon Emperor

I didn't know that this third sequel even existed (I loved the first two with Branden)! Loved the monsters that the evil emperor mummy could turn into and also the Yeti though the yeti did look cartoonish and not human enough. They should have put the part in special features about the ancient lover having the one arm because of torture in the regular movie as he being in the movie was not really explained. Very good movie but liked the first two a little better.

The comedy relief is wonderful the yak getting airsick is priceless. Watch it as a campy comedy and you'll love it.

Action, action, action. Basis in reality of remains found. Being grandmother, liked having the next generation involved.

If I could give it Negative 10, I would! DON'T ENJOY! The pitiful thing is, like THE CURSE OF THE FACELESS MAN, somewhere there's a decent horror story roaming around - BUT THIS AIN'T IT!

This movie made me very upset. My main issue was that they replaced one of the main characters with a far inferior actress. The acting seemed forced and the natural chemistry in the first two movies just was not there. I did like the fact that they dived into the Dragon Emperor a bit, but other than that it was a truly awful movie. If I could give it 0 stars I would

I thought Rogue One was like finding some old corn beef hash in the freezer from 40 yrs ago then adding a dash of MSG to it after heating in the microwave oven - a pretty bad movie - until I saw this movie.

The Mummy is like finding some split pea soup with extra ham in the bottom of the fridge six months later then parboiling it.

This is the worst movie I've ever seen. The first ones in this series were funnier as well as flowing easily while this movie crawls from one dead scene to another when it should have crawled back into the grave and pulled some dirt over itself.

LONG intro followed by explosions, wielding of weapons, and lots of CGI. Teens will love it.

Accusations of pandering to Chinese audiences aside, I personally think it works as a concept. Some of the acting is a little worse, and I'm not a fan of the new Evie actress or their grown son, but Brendan remains great. Personally, I would've rathered another movie with him than Tom Cruise.

Decent mummy movie, but was seriously disappointing without the presence Rachel Weisz.

I do not see this available at the library in DVD format.
Would it be possible to order in at the library the DVD ?
Would also love the buy the trilogy.
If anyone knows where to buy this ?

Fast paced with some nice special effects and high production value make this a solid piece of entertainment.

I liked the storyline, But the Script was terrible. Rachel Weisz wasn't in this film because of the horrible script, and because she couldn't travel to china for 3 months because she had a baby. But the bad script was the main reason.

I enjoyed the film and I'm not saying it wasn't worth a laugh, but I hated that Rachel Wiez wasn't in it. I like Maria Bello just fine, but she didn't belong in this role.

I loved the first two movies, but they destroyed it for me with this movie! Evey wasn't even the same character, which really agitated me. Don't waste the two hours of your life!

Despite my vast repertoire of linguistic knowledge, I find myself utterly at a loss of words which would even come close to emphasizing for you the horrendousness that was this film.
The acting, writing - everything - was horrible and childish; far worse than I would have expected from a series as renowned as this one.
Thankfully, my knowledge of adventure movies - which is extensive in certain genres - is minimal. While I can instantaneously point out where a number of elements from this film came from (such as the army of cursed dead, from the third Lord of the Rings; or the 'living statues', which I first saw in Laura Croft), I unfortunately cannot tell you if those films to which if just referred were original in their usages of said occurrences. I am sure that, with further study, I could accurately learn of the first movie to make use of 'living statues', or of any of the other references to earlier films, though I would just as soon leave this film to be forgotten amongst the long list of others I have seen.
If you want a less-than-mediocre adventure story with a fantastical plot. this is the film for you; if, perchance, you desire a picture worthy of your time - even if it be only one and three quarter hours - this most assuredly is not it.

very disappointing third chapter of the previously great Mummy movies. Not worth watching.

Fair - The Mummy: Tomb of the Dragon Emperor (2008) was a disappontment from the last entries. This time, Brendan Fraser travels to China and fights off a mummy from China's past. What worked in the previous films was the charm of mixing great heart-racing action with characterization. In this case, you have some pretty neat special effect shots but without the character relationships (though it tries). The most fun I had with this film is the scense of the 3-headed dragon and the yeti's. Replacing Rachel Weisz with Maria Bello may not have made the best of choices. Overall, the story seemed labored and I couldn't wait for it to end.